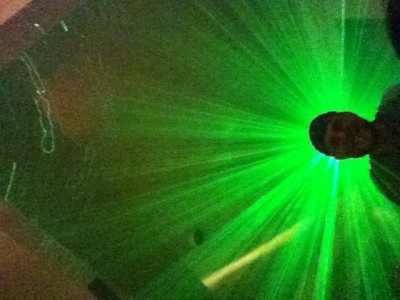 Firstly, how did you come to be involved with What Doth Life? How did Derek and the Demons come together, and what’s the group’s dynamic like?

I came to be involved in What Doth Life through Brendan. We met through our day job about a year ago. It was pretty obvious that we had a lot in common, so I had been wanting to jam, but I was living over an hour away. As fate would have it, that was just temporary.

Brendan had been telling me about this group of musicians in Windsor who cooperatively rented a practice space. I was intrigued. A space is key, and hard to find. The same folks who rent us the space, the Larson’s, also had an available apartment so I was able to move right in. The time span from when I realized I was going to move to when I landed in Windsor was less than a week.

About three days after I landed in Windsor, Brendan arranged a jam session with John, the Demons first drummer. Kiel, being the beautiful jam-junkie that he is, just happened to be hanging around the space that fateful night.

Musically, I would say we clicked right away. There was a lot of energy in the room. Long story short: It went well, to the extent that we decided to take it to the streets, literally; Harvest Fest was just a few days away, and a band had dropped out. So we hopped in the open slot and played our first gig, which was only our second time playing together. I was showing the guys chords to the songs quickly in between songs… All things considered, it went pretty well. We got a good enough response, and more importantly, had enough fun, that we knew we wanted to continue.

Aside from Derek & the Demons, you also recently worked on a project with your friend, Jay Stevens – What can you tell us about him and about that project?

Jay is an old friend and local author. He wrote, “Storming Heaven: LSD and the American Dream,” and “Drumming at the Edge of Magic,” with Mickey Hart. Almost two years ago we started a project of music and poetry, or, an “Orphic Revival,” as Jay has dubbed it. Eddie Bogosian and I created the music, Jay wrote the words and performed the vocals. It is very different from anything else I’ve been involved in. There are a variety of styles, musically and lyrically.. it’s kind of hard to describe, but not generally what people expect when they think of “spoken word and music.”

We recorded about 20 tracks, and just released the first batch of 10, titled “Jay Stevens – Dance House.” We haven’t really even begun to promote it yet because our website (laughingrex.com) still isn’t up, but we hope to fix that soon (keep checking.) Dance House IS currently available from iTunes, Amazon, CD Baby, Digstation, etc, as either CD or download. We hope to eventually put a live show together too, possibly in conjunction with the Demons.

Do you find that you prefer to have several projects going on at once, or do you just sort of take things as they come?

Well, both, I guess. I take opportunities as they come, but stay active on my own, and yes; having several projects going at once can keep you fresh and interested in each one; the Value of Variety.

That said, sometimes you have to make one project a priority and focus on it for a period to bring it to completion, like with a recording project. You can also spread yourself so thin that everything suffers… there’s a fine line… I guess even within the value of variety, there’s a balance to be kept between quality and quantity.

Do you have a sort of wellspring of ideas that you usually reach for, places, people, emotions, other artists, for example, that you find you are usually inspired by, or is your creation and motivation more spontaneous?

Mostly spontaneous. Songs come when they come. I stopped trying to force it long ago. That said; Be faithful to the muse; when inspiration comes knocking, answer the damn door, drop everything else and tend to it. You also have to tempt inspiration. This can be as simple as creating the time and space to play. Many a great song has started with a spontaneous riff or lyric line. And then sometimes when I’m not even playing I can hear a song in my head, and if I just keep listening, it slowly reveals itself. I also catch myself saying some phrase in a conversation and realizing it would make a good line for a song. So whether a riff or line, recognizing accidental composition when it happens is key.

You also do a fair amount of writing, what styles of writing do you gravitate towards? Are there other mediums that you think you might want to try your hand at, too?

I only have one paid and published credit, a magazine article, but I have experimented with many styles. I wrote a big ‘ol thesis for college, titled, “Biocosmomusicology: A Study of Life, Music, and the Cosmos.” It might be beyond the scope of this interview to try to explain that here, but I’ve toyed with the idea of expanding it into a book, or maybe just as an ebook. I also recently finished a novel, but I don’t talk about that much because I feel so pretentious saying, “I wrote a novel.” Whether it’s any good or anything will ever come of it, who knows. Maybe that will be an ebook too…

There are so many parallels between what’s happening in the music industry and the publishing industry; everything is in chaos, the big companies have crumbled or are crumbling, in theory there is great potential opportunity for independent artists with the power of the internet, but with both writing and music, direct marketing through the internet works far better for established artists. For an unknown musician or writer, there are similar challenges as before, even though the landscape has changed.

You make a good point between the parallels between the music & publishing worlds. If someone gave you an unlimited sum of money to start your own label and/or publication, what do you think you might do differently from some of the established outlets?

I’m no business expert, but stealing from the artists, that’s just bad karma.

Actually, in lieu of the unlimited sum of money, Jay and I are developing a marketing strategy for LaughingRex.com (which will sell all our books and CDs, as well as related merch.) We call it “Ten Dollars and a Medici.” It embraces elements of gift economies along with an intentional patronage network, and ultimately, what is essentially profit sharing with the fans, who are part of the distribution system. Everyone is trying to figure out how to monetize the current culture of sharing. The potential wealth of the arts industry is still there, it can still be generated, and because the suits are cut out of the equation, less wealth actually needs to be generated for the artist to still end up ahead of the old model. We’ve known that much for a while, but everyone still seems to be figuring out how to really make this work. The old model has fallen, but the new model is still under construction. The twist we’re putting on it is this: Share the wealth. With the fans. This is the one crucial piece bands aren’t doing, as far as I know. It’s a mind-bender because it clashes with conventional business thought, and sounds kinda like a hippie pipe-dream: The more you share, the more wealth is generated. But it’s true, because the game is more fun when everyone has some level of ownership. Basically, we want to create incentives for people to consciously engage in a game where energy in the form of music and words (and in some cases $10,) moves around.

Name a book, a film, and an album that have left an impression on you (either recently, or all-time faves, your choice!)

All time faves list would be too long, so I’ll give you my list of first big impressions:
Book: Brave New World by Aldous Huxley. (Age 15 or 16?)
Film: Easy Rider. (About same age?)
Album: AC/DC – Back in Black.

I was pretty young (9 or 10?) when I first heard that album. I pretty much learned how to play drums and guitar to that band. I went on to listen to a lot of classic rock (Dylan, Neil Young, Hendrix, Stones, Led Zep, etc.) and then later world music (Ali Farke Toure, Baka Beyond, King Sunny Ade, etc.) The only contemporary act I’m really into right now is the Black Keys. Tip of the hat to you guys for keeping the spirit of rock and roll alive and pure.