Community radio station WOOL-FM, the What Doth Life music collective, What’s Up In The Valley magazine and website, and Popolo Restaurant are joining forces for a hot summer concert series featuring some of the best up-and-coming original rock bands from Vermont and New Hampshire.

The three-concert series kicks off July 21 on the island in Bellows Falls at the funky and fabulous 33 Bridge Street warehouse, home of WOOL-FM and What’s Up In The Valley, and just steps away from Popolo Restaurant. The lineup includes Derek & The Demons, Dudestew, and Caleb Thomas & Ryan Hebert. Three headliners! Amazingly, cover charge is just $5. There will be a cash bar (with positive ID only). Doors open at 7:30 PM, music starts at 8:00. In addition to the July 21 blast, upcoming dates are
August 18 and September 15, with lineups TBA.

Punk/pop malcontent rockers Dudestew burst from central New Hampshire with their tongue-in-cheek banner flying: “It’s a wonderful world out there and we’re here to tell you all about it.”

Prolific guitarist Ryan Hebert and drummer Caleb Thomas duo up and set the dials to scorch.

The concert series is a fundraiser for WOOL-FM, the member-owned, volunteer-run Bellows Falls-based low-power community radio station broadcasting to the mid-Connecticut River Valley of southern Vermont and New Hampshire at 100.1 FM, and streaming live worldwide via the internet at www.wool.fm—where you can also find everything there is to know about the station.

What Doth Life is a Windsor-based music cooperative with the mission of helping bands help each other. It’s not a record label, it’s not a management firm—it’s like a brand, but with nothing to sell. Based on
strength in numbers philosophy, it’s about the music, the musicians, and the audience. Dan Bolles of the magazine 7 Days VT wrote, “My guess is that the next awesome crew of likeminded songwriters and rockers won’t emerge from the state capital or Vermont’s most populous city. Instead, keep your eye on
What Doth Life.” See www.whatdothlife.com to find out more.

What’s Up In The Valley magazine and website feature extensive events and activities listings for the Mid-Valley; see www.WhatsUpInTheValley.com for all the happenings and all the details. It’s a project of non-profit, member-owned Great Falls Community Media, which also operates WOOL-FM, Black Sheep Radio. 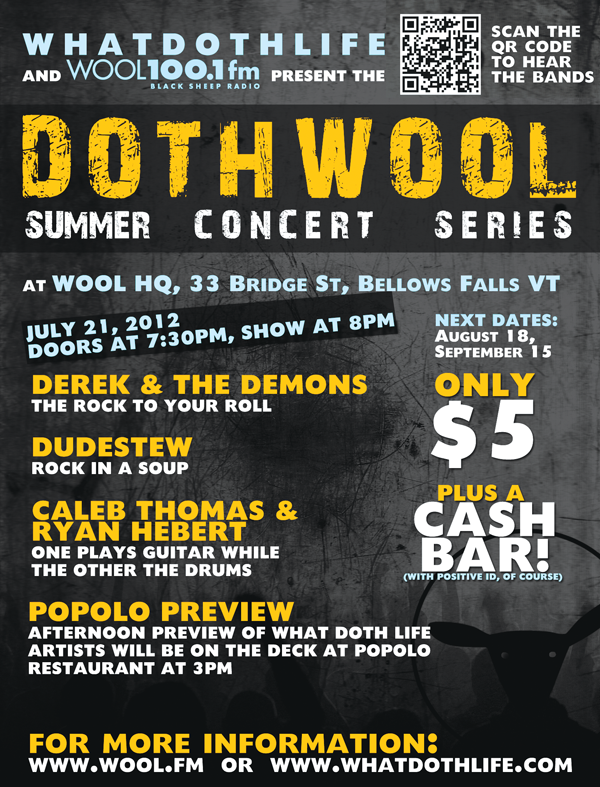